The English workbench form has held a great deal of attraction for me for two primary reasons: it is the predominant traditional form in Britain, and one that epitomises simplicity. I think there was possibly another, hidden motif of a challenge: will it meet my current and future needs? Can I do without all the fancy stuff? Will I manage?

What often crops up with this workbench form is workholding. The aprons prevent clamping to the bench top which is what some people are used to doing; I certainly have done it in the past. The answer to this is holdfasts for me. You do not need more than several strategically placed holes in the top for them and they hold, well, fast. The bench with holdfasts also allows you to do away with the end vice – actually,  I never had one before and still do not see it as essential. Perhaps it is my inexperience but I have yet to find myself in a situation where I would think, ‘man, if only I had an end vice this whole job would be possible / twice as easy / etc.’.

The planing stop is one of those unsung heroes of hand tool woodworking; it is absolutely genius as it utilises the physics of the planning force and the inherent construction elements of the bench for maximum effect. Above all it is simple and it just works; you could get away with a couple of screws or nails in the top, my choice was to build an all-wooden stop in. I would sooner give up my face vice than my planning stop! Speaking of face vice, initially I was going for the horizontal English-style version. Part-way through the build, however, I decided to double what was the initial thickness of the top and I felt the vice screw might end up being a bit too low which may cause racking. I was not certain if it would indeed become an issue but I did not want to do this part of the build twice in case it did end up a problem. I went with a leg vice in the end.

The workbench is a simple design to build, but very strong. The joinery and the design are tied together here. The leg assemblies – trestles – with all their stretchers are joined with half lapped dovetails, glued and nailed through. Quick, solid, simple. The aprons for the bench need glued up as I do not have wide enough material, I use a couple of rough-sawn 2in boards for each. The legs will be housed, glued and nailed into these. I am leaving an eighth of an inch gap between the bottom of the apron and the shoulder in the leg; this will accommodate future seasonal movement in the apron. In the true English bench style I will add stretchers between the aprons, too. This will stiffen everything up and act as a torsion box. The stretchers will also get housed into aprons, and glued and nailed in with forged nails. Yum. 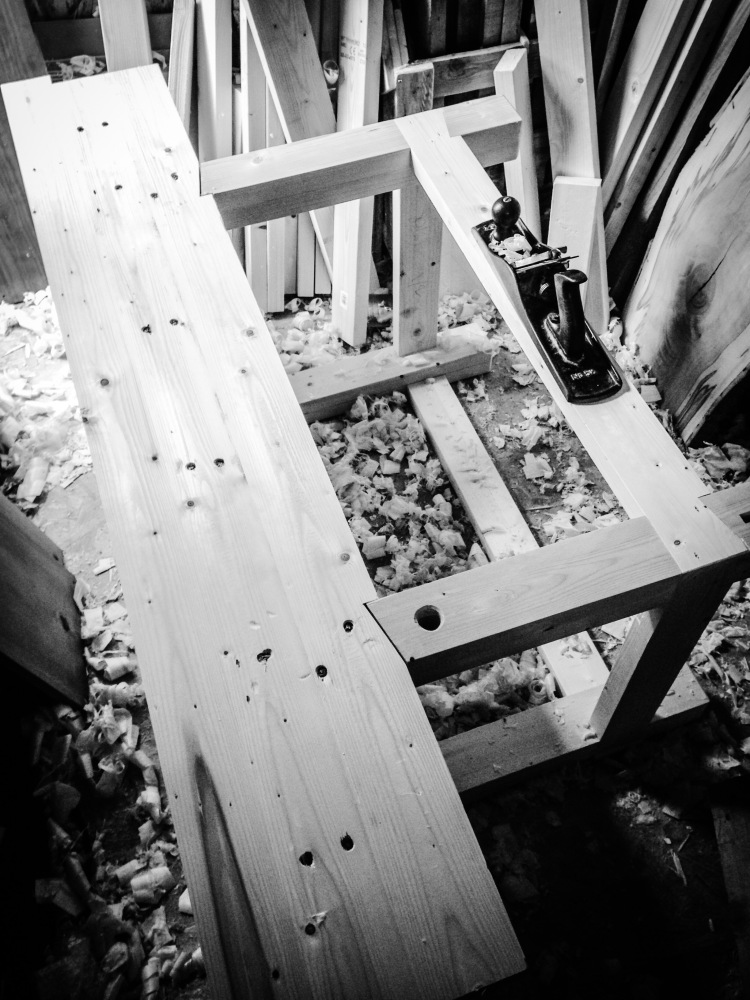 Half-lap ‘tails and housing joints, that’s all there is to the base. You could also do straight half-laps instead of dovetailed ones, and I would say you’d still be on dry land.

The bench top will be a bit of a hybrid in that it will use a nailed-through planked construction form, typical of some old English style benches with thinner tops, made of wide planks. Here, I am applying this construction method to somewhat more modern, thick, laminated slabs instead. This will call for some serious nail size.

One might wonder why bother with nails and nailing through the top when a lot of modern practice calls for screwing in the top from underneath; leaving nail holes in particular might raise some eyebrows. My reasons are as follows:

Chances are, if you are of opposing opinion to No. 1 above, Nos. 2 – 6 will not make much difference to you. To this I say keep on screwing and enjoy yourself. No sweat.

I am going for a tool well at the back of the bench top and so decide on two planks to form the main working surface; this gives me 15 in width of solid work surface. I consider somewhere around 13″-14″ a minimum for my requirements. I really fancied a solid top without a tool well; my worry was that with the modest size of the top the well will come in very handy. If I change my mind, I can always add another plank in the future. Nae bother.

I am using a mixture of rough sawn and pre-planed structural timber, and will also manage to reuse some 70-year old pine I salvaged after doing some works on the house. I add some hardwood bits I had around. The main point is, though, that this is a softwood bench and utilises construction grade timber from the building yard (or big box store – some of mine came from Wickes, and that was for no reason other than I was driving past and remembered I needed some). You could make this on a very tight budget and still have a workbench for a lifetime.

The top is laminated with 2×4 spruce. Now, I read it somewhere – and I think it was Christopher Schwarz’s book – that spruce is a poor choice for a workbench because you just cannot get a good finish with it. Yes, I would take red pine over spruce anytime but:

The planning stop is ash and the leg vice guide, oak. Any robust hardwood would do I guess. I just used some bits I had in the workshop.

The vice chop itself is beech, that king of continental workbench design. Here, I am recycling an offcut of a staved kitchen worktop I picked up somewhere. It should be plenty strong. The only specialist piece of kit I had to buy was a vice screw and I went with a Czech-made jobbie from Axminster. A bargain but time will tell how well it holds up. 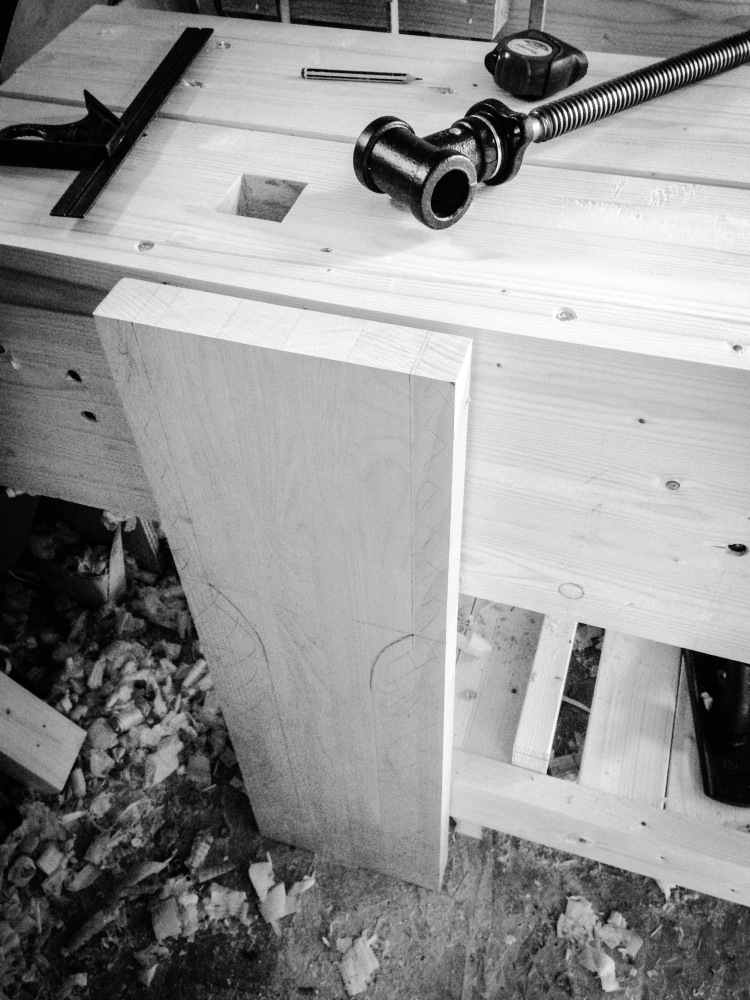